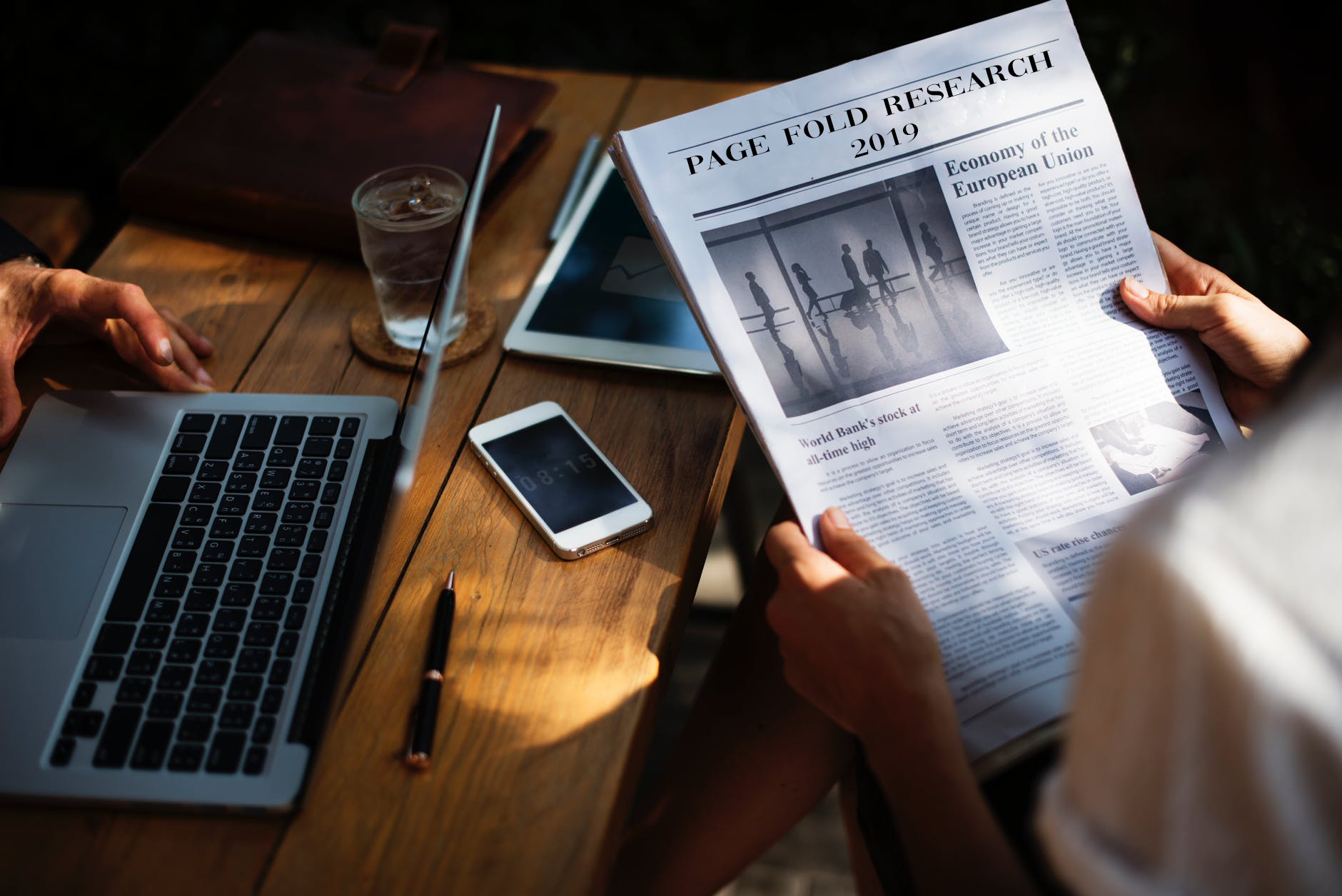 Additionally, back then, people do not have a habit of scrolling down. Because it is not a natural thing to do during that time. People relied on the information in the initial screen. The concept of page fold comes in place. This concept forced web developers to squeeze more information they possibly can above the fold. Nowadays, while scrolling became second nature to internet users, the practice of “squeezing” continues.

What is a Page Fold?

The use of page fold started centuries ago. When newspapers hit the newsstands, sellers had to fold it. Passerby only sees the upper part of the front page without unravelling it. Newspaper industries had to create eye-catching headlines and head-turning imagery on the front page for it to sell better. And when the era of the internet came, it borrowed the same concept. Landing pages had to be engaging to users for them to stay in the page longer.

A page fold is an imaginary line that separates what are initially visible to internet users without scrolling down the page. Aptly called “above the fold,” web developers give importance to this area because it is what users see first. Thus, they use this area to compact as much information as they can. 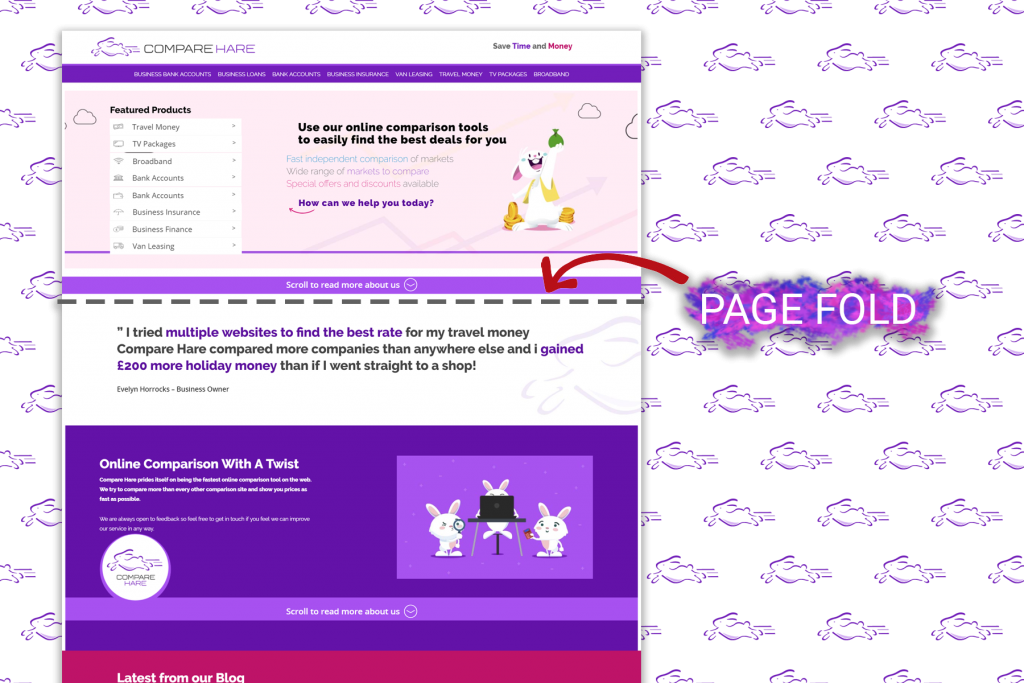 Therese Fessenden says that people’s behaviour does not often change. But there is one user behaviour that changed since the introduction of the internet: user’s tendency to scroll. Fessenden conducted a study on user behaviour on Scrolling and Attention. The study employed eye-tracking technology to help better understand user behaviour and the importance of page folds.

The study gathered 120 participants. Fessenden used full HD screens with a resolution of 1920 by 1080 pixels and compared it to a previous study that used 1024 by 768 screens. Fessenden performed the study to establish whether this user behaviour has changed or not. 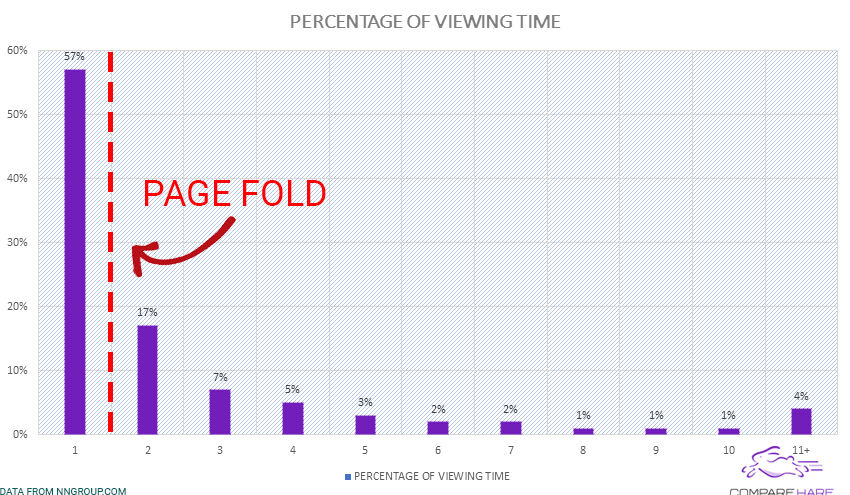 Fessenden recognised that all webpages do not have the same length. Hence, she divided websites per 20% segments. This way, she eliminated the variable of web pages length in the study. Furthermore, Fessenden compared the result of to search engine results page or SERP. Fessenden arrived at the same conclusion that internet users look at the top segment for a longer time. The same can be said to SERPs where the top search results are more likely to be clicked by users than the following links. For this reason, webpages are prioritising the implementation of SEO to improve their rankings on SERPs. 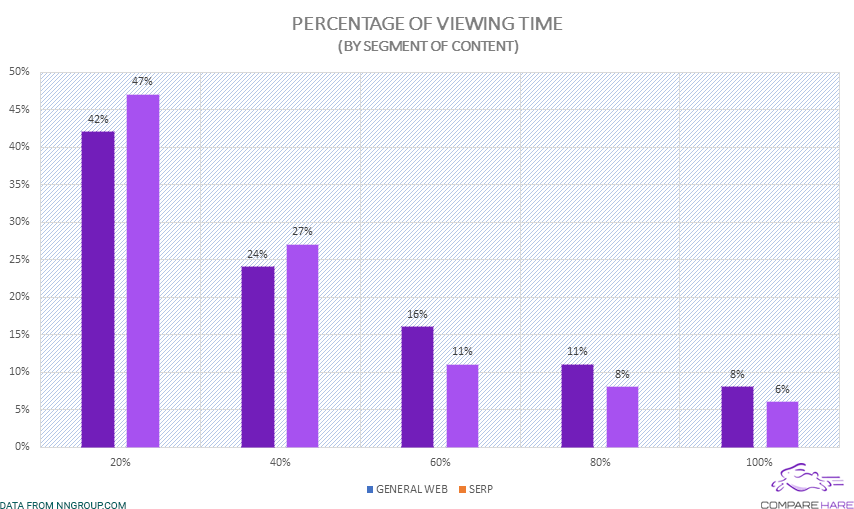 The study also found out that many internet users employ an F-pattern of scanning a webpage. Users tend to look more at the content on the top, and then spend less time as they continue to scroll down. Thus, forming a pattern similar to the letter “F.” If you look at the figure below, it shows the heatmap generated from the eye-tracking technology. Most users mainly focus on the top part: the area above the fold.

A heatmap of a website generated using ‘eye-tracking’ technology. It shows where users mainly focus on when looking at a website. source

In conclusion, people spend more time at the top of webpages. But recent studies show that this is changing. From 80 per cent of time spent on the upper webpages in 2010 down to just 74 per cent in 2018, it’s either web developers doing their jobs properly or people just learning to scroll down more. Either way, the rule “Scrolling is not allowed” doesn’t apply anymore.

Best Above the Fold Practices

Screen size varies from one device to another. Back in the ’90s, the area above the fold has a specific dimension. But with devices having changing screen sizes, nowadays, its dimension became indefinite. From as small as your smartphones to as big as your television, the fold lies anywhere. Despite this problem, web developers made websites to adapt. Most of the time, websites have mobile and website versions. And Google is now prioritising websites with mobile versions and giving them high search ranking.

Contents above the fold collect the most viewing time. Web developers need to beware that compressing all content above the fold is counterintuitive. However, also be careful about what you put there. If users don’t like what they see initially, they will leave the website immediately. Wrong use of the real estate above the fold can increase your bounce rate. This will harm your business in the long run.

The concept of the fold stays significant to web design. However, as to how things progress and people’s behaviour change, content creators and web designers adapt to these changes. While the importance of the fold holds, it is just as complex. This concept is difficult to understand because you are dealing with user behaviour. As for 2019, the area above the fold is there to stay. If you grasp its concept, you will be successful, and your website will help you achieve your business goal.